Ron Williams is an inventor and co-owner of Cablz, the company that manufactures the market changing eyewear retainer of the same name. Ron created Cablz out of necessity. One day while driving he turned his head to check traffic and his fabric eyewear retainer snagged, knocking his sunglasses across his face, and was nearly in an accident. Once he perfected the design, utilizing a unique ball bearing interface, Cablz took off. At a trade show, Ron found a large company selling a knock-off. When he tried to stop them, the PTAB (Patent Trial and Appeal Board) was used to invalidate his patent. Other infringers threatened that if he tries to stop them, they will not only invalidate his remaining patents, but also sue for their loss of income, from selling his invention! Ron is unable to stop the theft of his invention, and the emotional and financial cost has been significant.

Excerpt From Ep.5 ‘In The Trenches With Inventors‘ – featuring Ron Williams.

Ron Williams became an inventor, as have many, due to a specific product need that he felt should be filled. One day in 2007, Ron was driving and turned his head to check traffic. His eyewear retainer snagged and impeded his vision, almost hitting an elderly woman in a parking deck. Rather shaken and upset from this experience he had tossed his glasses off to avoid a similar incident.

As fortune would have it, his sunglasses had landed on top of a variety of steel cables utilized in various medical procedures and the wheels started turning. His initial prototype used electrical tape, steel cable and rubber attachments. He perfected the design with a unique and clever idea, ball bearings. Cablz, the eyeglass retainer that stays off the neck and keeps sunglasses on the head of the wearer, was born.

Two years after that point his product hit the market. Ron filed for a patent to protect his innovative retainer in 2008 and the patent was granted by the U.S. Patent and Trademark Office (USPTO) on January 12, 2012.

In 2009, Cablz won the New Product Showcase award in the apparel category at ICAST (International Convention of Allied Sportfishing Trades), the “premier showcase for the latest innovations in fishing gear, accessories and apparel.”

After customer feedback told him that people would like the ability to lengthen or shorten their Cablz retainer, an adjustable version launched in 2012.

Cablz had gained traction in the U.S. and Canada and Ron had been attending an outdoor retailer trade show in Utah. It was there he discovered another firm had stolen and was selling his idea.

Co-owner Holly Williams said, “The lightweight ‘off the neck’ designs is so market disruptive that others are duplicating it. Cablz and its concept truly is ‘The Next Generation’ in eyewear retainers.” 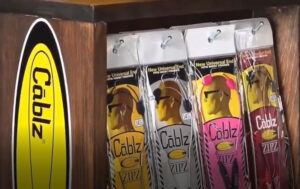 “Cablz is the sole originator of, and holds patents for, its unique Cablz eyewear retention system. We take our intellectual property rights very seriously. We therefore intend to take the steps necessary to protect our patents from any company or party that seeks to profit from those patents without authorization,” Ron declared.

The response from Chums, of course, was to file an Inter Partes Review (IPR), an attempt to invalidate Ron’s patent, while also causing the lawsuit to be stayed until the Patent Trial and Appeal Board (PTAB) makes their determination concerning the IPR. Chums requested the PTAB to consider whether or not the Cablz patent should have been granted in the first place.

The PTAB, as it has done in 84% of the 3,000 patents they have reviewed, determined that the claims made in Ron’s patent were invalid, thus revoking Ron’s patent. The decision was appealed to the United States Court of Appeals for the Federal Circuit (CAFC).

In 2017, the CAFC heard the case and, in their opinion, they “considered Cablz’s other arguments and do not find them persuasive.” The CAFC affirmed the PTAB conclusion that the claims in Ron’s patent “are un patentable.”

Why has this type of decision occurred in 84% of the patents that have been reviewed by the PTAB?

Much of this is due to ambiguous language and loopholes in the America Invents Act of 2011 (AIA). Patent infringers have been able to convince unqualified Administrative Patent Judges (APJs), who have no real patent examination experience and who are by no means experts in the field, to nullify decisions that have been made by highly qualified USPTO Patent Examiners who spend a year or two of extensive research and review – even up to a decade – prior to granting a patent.

Since the CFAC decision, Ron has found other knock-offs, but he feels helpless. Those companies have letters from the attorney who represented Chums that essentially warn Ron that if he tries to litigate with them the Chums attorney will file IPRs on the rest of Ron’s patents.

In a word, blackmail. Using the PTAB and IPR to get their way.

As it stands, Ron lost his main patent and any company is able to freely and openly copy his disruptive and innovative design and sell it like it was their own idea. Fortunately, the good name of Cablz has allowed him to stay in the market.

As Ron says, “Basically what I have to go on is my name. I’m glad I had that trademarked and it’s standing strong and people are asking for it by name.”

Cablz captured New Product Showcase Winner in the apparel category at ICAST 2009,
the premier showcase for the latest innovations in fishing gear, accessories and apparel.