As Senior Counsel of the House Judiciary Committee, Vishal Amin was an architect of the Patent Trial and Appeal Board (PTAB), the administrative tribunal that has destroyed thousands of patents, destabilized the U.S. patent system, and sent venture capital and countless technology startups to China. Where does he stand now? 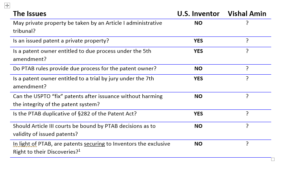 The Senate Must Vet Vishal Amin

US Inventor represents tens of thousands of inventors who create jobs by using U.S. patents to bring new ideas to existing companies, or to start their own.  We are all suffering from the US Patent and Trademark Office (USPTO) implementation of Patent Trial & Appeal Board (PTAB) created under the America Invents Act (AIA).  Vishal Amin was the primary architect of the AIA.  President Trump has nominated Mr. Amin to serve as White House Intellectual Property Enforcement Coordinator, sometimes referred to as the “IP Czar”.  US Inventor asks the Senate to consider the effects of the AIA in Mr. Amin’s confirmation process.

In the AIA, Congress granted the USPTO broad power in the PTAB to weed out those few patents that were granted but perhaps should not have been.  However, largely due to PTAB, the U.S. patent system now ranks 10th in the world, tied with Hungary.[1]

PTAB invalidates at least one claim in more than 95% of patents it reviews.[2]  Invalidating just one claim can destroy the patent.  The cost of defending a single PTAB starts at $500,000 and burns five years of the patent’s life. Big corporations “gang tackle” inventors by filing multiple PTABs against the same patent, thus driving the cost of defending a patent into the millions of dollars.[3]  PTAB is obscenely unfair and damaging far beyond the patent’s value.

PTAB damages capitalization of our most important new technology startups – those with innovative new technologies that must be protected by patents.  These are the very companies that have historically created most of our new jobs.

While we weaken our patent system, China strengthens its patent system.  This is causing venture capital that once propelled startups here to move to China.[4] [5] Along with that funding goes job creation and economic growth, but more importantly, the leading position in new technology creation on the world stage also goes, which is extremely damaging to our national security.

Changing PTAB rules may help for a while, but will not fix the PTAB’s systemic problems.  PTAB rules will change with every new administration.  While a patent’s term is 20 years, PTAB rules may very well change every four years.  This leaves the patent system perpetually unstable and as such unable to drive economic growth and job creation because patents will never be able to attract investment for early stage startups.

Not surprisingly, PTAB is the most used patent litigation venue.  Far more than the Eastern District of Texas.  PTAB, an administrative tribunal, invalidates property rights without a jury and under completely different rules than an Article III court, which is in conflict with 220 years of black letter law, precedent and the U.S. Constitution.

Vishal Amin is an architect and the primary driver behind the AIA and the PTAB.  He must explain his reasoning for the most damaging legislation to the patent system and American innovation in U.S. history.  Unless he can reasonably explain his position on these issues, he must be assumed to be unqualified for the position of White House Intellectual Property Enforcement Coordinator.