He was at the forefront of change and environmental consciousness through innovation in energy conversion processes. TAS was the originator and global leader in producing additional peak power from gas turbine power plants through Turbine Inlet Chilling (TIC) which Tom pioneered in the 1980s. However, a competitor stole his patented technology, and then used the Patent Trial and Appeal Board (PTAB) to invalidate four of Tom’s patents, crippling his operations.

Tom is featured in the award-winning documentary “Invalidated – The Shredding of the US Patent System,” detailing stories of inventors in America who have had their patent rights destroyed by the consequences of recent patent legislation.

From Invalidated – The Shredding of the US Patent System, featuring Tom Pierson. 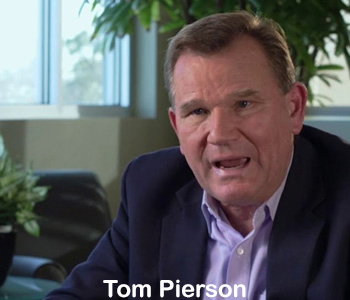 Little did Tom Pierson know, working as a General Manager at Trane and specializing in Process Cooling, that his career choice would result in the development of high-tech innovations for, and the disruption of, the Industrial Cooling industries.

Tom reached the top of his game through design, experimentation, and new innovations. “I am the founder of a technology called Turbine Inlet Chilling (TIC) which specifically involves generation and storage of energy,” he said.

Recognized as ‘The Godfather of Gas Turbine Energy technology,’ Tom worked on his designs for seven years and in 1987 implemented his system into the world’s first turbulent chilling project. He continued to improve it over the next nine years, resulting in the TIC mechanism.

The not-yet patented process involved stratified chilled water and thermal energy storage tanks with chillers arranged in series and variable flow. “With this technology, I did a particular project for a company in Texas,” Tom said. “And it went so well I realized then that I had to pursue a patent on the technology and system.”

A year after that project he filed for his first patent. Soon after four additional patent applications were submitted for the different technologies and expansive systems he had developed.

During the 1990s there were a number of competitors emerging in the inlet chilling industry. However, Tom’s systems provided quite different and unique solutions, such as chilled water and later thermal energy, whereas his competitors were using a potentially dangerous ammonia process.

“There’s a lot of work that goes into creating these disruptive projects,” Tom stated. “The power industry is an illustrious and prestigious industry, yet a very old industry stuck doing things the same way for 100 years.”

Tom believed in the processes he had developed and he and his firm spent massive amounts of time, effort, and energy to bring them to fruition. “We felt good about investing the time,” he noted. “We thought our intellectual property was protected by our patents.”

However, competitors noticed the successes the TAS systems were achieving. They blatantly began copying the technique and procedure to the exact parameters, with lower job bids.

“They not only copied what we did,” Tom explained. “But they openly bragged that they followed us around.” They were able to charge less due to not having invested any time or investment into the technology. The infringers were riding on the coattails of TAS, while generating massive amounts of profit, all at the expense of TAS.

Tom and TAS notified them continuously they were violating the company’s four patents. The warnings were blatantly ignored, and violation of the patents and winning different projects over TAS continued. With no other choice, TAS filed a lawsuit against them.

Once the trial began, TAS was slapped with numerous Inter partes reviews (IPRs) by the company, in an attempt to invalidate (revoke) the patents. Tom had never heard of an IPR and didn’t fully understand the ramifications or implications IPR’s would have on the patent appeal process.

“They filed four IPRs”, Tom explained. “And I thought well, there’s no way in the world, and impossible for them to win. We have not just one claim, we have numerous claims across four different patents, all examined by four different and respected patent examiners.” 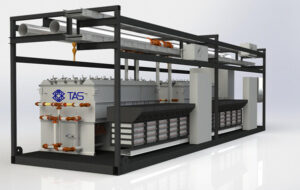 Despite spending a small fortune on legal fees, Tom ended up being dead wrong because their opposition, the infringers, did prevail.

The PTAB, aka the ‘Patent Death Squad,’ invalidated every issued patent belonging to TAS.

One of the major travesties with these hearings is that the PTAB Administrative Patent Judges (APJs) make their decisions without ever once conversing with the highly trained patent examiners, deemed as experts, who originally granted the patents. Their actions overturned the judgements of not one, but four different patent examiners.

With their patents invalidated, all of TAS’s traction in the marketplace – along with over 300 direct jobs in Houston, as well as numerous other jobs worldwide through outside purchasing channels of the numerous components required to manufacture TAS’s products – is in dire straits.

“Our company is in jeopardy,” Tom wrote in his letter to Congress. “With this unexpected PTAB decision it essentially invalidates all our key TIC patents. This IPR process is relatively new since it was created about a year after the AIA [America Invents Act] passed Congress in Sept 2011 and I was not even aware of it until one of our competitors started using it against us to nullify our patents.”

Even though the intent by Congress with the PTAB was to alleviate or reduce frivolous lawsuits filed by unscrupulous companies, the blows delivered to inventors by the PTAB have emboldened patent infringers, primarily Big Tech and large multi-national corporations.

What is happening to TAS, as well as thousands of other inventors and companies, is a true travesty to not just our patent system, but to American innovation. The PTAB decisions are stripping people and their firms of their constitutionally guaranteed property rights.

Destroying patent rights, as the PTAB does regularly, devastates a large part of the American Dream.

Unless the AIA is repealed, or the PTAB is substantially revised to reflect the intent of our U.S. Constitution, an inventor with a patent on any valuable technology has close to a zero percent chance of stopping large corporations from stealing the tech and profiting from it without having invested a dime to create it.