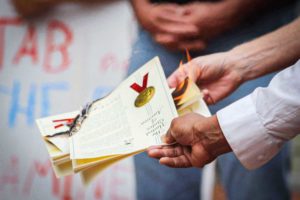 About a dozen inventors in town for a conference set their patents aflame in front of the U.S. Patent and Trademark Office headquarters Aug. 11 to protest what they called an unfair administrative system for invalidating patents.

The passage of the America Invents Act of 2011, a sweeping overhaul of U.S. patent law, led to the creation of administrative patent reviews as an alternative to the more costly path of challenging patents in federal district court. But patent holders say those proceedings, where anyone can claim a patent is invalid because it’s obvious or not novel, make it too easy for those accused of infringement to get patents invalidated.

Moreover, they say, the patent system now favors alleged infringers, as recent U.S. Supreme Court decisions, changes in the law, and the PTAB have led to the cancellation of numerous issued patents.

“Patents are junk in the U.S. and that’s why I’m burning my patents,” Paul Morinville, an inventor of software applications and founder of US Inventor, an advocacy group for independent inventors’ intellectual property rights, said as he set his patent ablaze with a cigarette lighter.

The PTO is “issuing patents on one side of the office and the other side is changing their mind,” Josh Malone, who invented Bunch O Balloons, a product that fills numerous water balloons at once, told Bloomberg BNA before the protest. “They should get it right, stick with their decision and let the courts sort it out.”

One of Malone’s patents was invalidated in January at the PTO’s Patent Trial and Appeal Board, and another is under review. The PTAB should only take up petitions that challenge “egregious” patents, Malone said, but it institutes examinations in 70 percent of patent-challenge petitions.

Originally published by Bloomberg BNA, coverage of the event also appeared in the Regulatory Transparency Project.