Congress should not rush through H.R. 6758, an extension of USPTO fee setting authority. Many questions about the Agency’s recent use of that authority remain unanswered.

H.R. 6758 was introduced on September 11, 2018 by Congressman Chabot and includes provisions “to extend by 8 years the Patent and Trademark Office’s authority to set the amounts for the fees it charges, and for other purposes.” The current temporary fee setting authority of the USPTO sunsets on September 16, 2018. This bill ignores controversies with the USPTO’s use of their temporary fee authority and may conflict with H.R. 850, The Agency Accountability Act co-sponsored by 157 House members.

This bill was introduced at the last minute, days after inventors testified at the Patent Public Advisory Committee (PPAC) public hearing on the USPTO’s most recent fee increase proposal asking the USPTO to reconsider the fee increase and to follow the law in rulemaking to increase fees. The USPTO openly says at each quarterly PPAC meeting that extending fee authority is their number one priority. For two years the USPTO has been spending its user fees to lobby Congress to extend their fee setting authority.

The text of H.R. 6758 is not yet available via Congress.gov for public access. The USPTO is based on publication and transparency. We find it disconcerting that this bill comes out days after inventors testified at the USPTO headquarters in front of Director Iancu and at a public hearing hosted by the Patent Public Advisory Committee (PPAC), the American Inventor Protection Act of 1999, to provide oversight over the USPTO.

Why is all this really jammed up before the September 16, 2018 sunset of the fee authority per the AIA? Is the USPTO trying to cover their bases by starting this new, second round of fee increase rulemaking just when their authority is expiring and only months after their first fee increase rule was finalized?

The USPTO’s first use of the AIA created temporary fee setting authority under Director Lee was controversial and was delayed until the Trump administration. The independent inventor advocacy group, US Inventor, gave voice to inventors and their concerns about this first fee increase. US Inventor’s public comments to the USPTO, OMB and the PPAC describe in detail how the USPTO and OMB strained to circumvent rulemaking procedures, executive orders, economics, and due process[1]. Ultimately, the USPTO and OMB have relied on a bizarre abstract concept called “transfer” to justify this first fee increase and the harm it does to inventors. H.R. 6758 will reward this unjust conduct by the USPTO.

In explaining how they avoided the One-In-Two-Out Executive Order (Executive Order 13771) the USPTO stated “The Office of Management and Budget (OMB) has determined that this rule involves a transfer payment from one group to another that does not affect the total resources available to society.”[2] Yet there is no exception for transfer payments in President Trump’s Executive Order. It applies to all rules. It certainly applies to rules that increase fees. And they are not transfer payments anyway. Clearly when an applicant pays fees to the USPTO that is less money in the economy. This same “transfer” rationale was used to determine that increasing fees by $720M over 5 years would produce a monetized cost of $0.[3] This agency is clearly not responsible enough to be managing its own budget.

The fact is that fees are taxes and all tax issues need to originate in the House. In 2011, when S.23, the Senate version of what became the AIA, arrived in the House then Budget Chair Paul Ryan and Appropriations Chair Hal Rogers openly protested the bill because it ended the diversion of fees to Congress from the USPTO. [4]

Ryan and Rogers argued against handing the Congressional “power of the purse” to the Administrative Branch, and for strengthen oversight of federal agencies to ensure resources are being used wisely and appropriately, and to prevent agencies from over-stepping their authority.

As predicted, the agency was quickly captured when Google’s top patent lawyer was appointed as USPTO Director and then hired lawyers (in violation of the Appointments Clause) that had represented Apple and other multi-national corporations to cancel the patents they were accused of infringing (to date the PTAB has cancelled claims in 85% of the patents reviewed).[5] Using this new rulemaking power, Director Lee set fees charged to PTAB petitioners (usually accused infringers or their privies) much lower than costs.[6] For example, the average Inter Partes Review has a net loss of $11,839 per review. The only source available for the PTAB deficit has been the applicant fees, meaning that inventors are being taxed to fund the cancellation of our own patents in the PTAB. Director Lee and then Acting Director Matal admitted at public meetings that applicant and owner fees were used to subsidize the discount rate PTAB.

The Executive Branch has gained exclusive control over funding, creation, and destruction of patent rights. The result has been enrichment of politically influential corporations at the expense of inventors, startups, and small businesses. This agency capture has dramatically devalued the existing stock of commercialized patents and destroyed confidence in patents as collateral for capital investment in development of new technologies.

We need to learn from our past to order to improve public policy and agency accountability going forward. The USPTO has mismanaged the process to develop new fees and rushing to extend their temporary authority this week before it expires on September 16th makes no sense to us. We fear that H.R. 6758 will be rushed to the floor this week as a budget neutral and non-controversial issue.

US Inventor urges you to place a hold on H.R. 6758 and to question H.R. 6758 on its substance and on the flawed process. 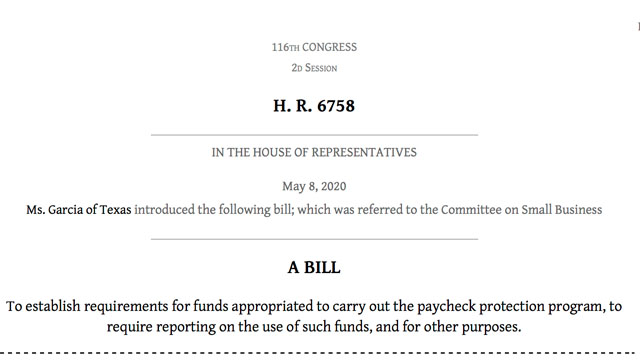