Kip Azzoni Doyle is a renaissance woman. Aside from being a mother, she is a writer, inventor [CardShark WalletSkin], adventurer, entrepreneur, gearHead, screenwriter, freelance journalist, content creator, humanitarian and mission-driven for veteran causes. She holds a Masters Degree in Screen Writing from the Tisch/Gallatin Division at NYU and has a range of feature films and TV properties in play.

She is constantly battling with infringers over her innovative CardShark and has experienced something no inventor, nor anyone else for that matter, should have to endure. The disgraceful and vicious manner in which she was treated by one particular infringer should open anyone’s eyes to the way in which patent thieves have gamed the system, since the establishment of the Patent Trial and Appeal Board, aka ‘The Patent Death Squad.’

Kip speaking at the Decade of Stolen Dreams Rally in Detroit 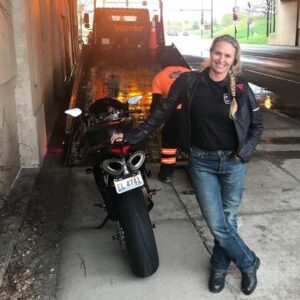 Kip Azzoni Doyle is a self-described “Mother, Writer, Inventor [CardShark WalletSkin], Adventurer, Entrepreneur, GearHead.” Others have added screenwriter, freelance journalist, content creator, humanitarian and is mission-driven for veteran causes. She attended Pomona College and then transferred to NYU for her undergraduate degree and then a Masters Degree in Screen Writing from the Tisch/Gallatin Division at NYU. Here, we take a look at her inventor side.

Innovation can, and does, occur when a person notices something that can be made easier, more user-friendly. What Kip noticed was people sticking a card or some cash on the backside of their phone case and then reattaching the cover. In her own words, “I invented a phone case that holds credit cards on the back of the case. A simple solution to an everyday problem. It was back when everyone would peel down the corner of their phone case and slide their credit cards behind their phone.”

She created what became known as the The CardShark WalletSkin and, in 2014, applied for and received three utility patents from the US Patent and Trademark Office (USPTO), following extensive investigation and research by highly-trained Patent Examiners.

One of her CardShark patents states that she has invented a “Protective covering for personal electronic device” with a “rear protective face, adapted to allow insertion and removal of cards or paper currency into and out of the pocket in the manner of a wallet.”

Unfortunately, this renaissance woman and her three patents, like so many other inventors of late, could not avoid ever-present patent infringers.

Since the establishment of the Patent Trial and Appeal Board (PTAB) in 2012, large conglomerates and Big Tech have gamed the system through loopholes and ambiguities in the America Invents Act of 2011 (AIA) to, basically, steal patents from the “little guy.”

It is done through what is known as an Inter Partes Review (IPR), which is an attempt to invalidate (revoke) existing patents, through the PTAB. This is somehow accomplished even though the PTAB Administrative Patent Judges – who are not real judges – typically have no real-life experience as patent examiners.

Deep pocket corporations know that few independent inventors or innovative small businesses and startups can afford the half million or more that it would take to defend their patents. And, worse, the PTAB has already invalidated 84% of the 3,000 patents it has reviewed. Knowing these odds, most inventors cannot assume that hazardous possibility.

Kip has had to fend off many infringers, at times taking less in licensing fees, or risk an expensive IPR and, most probably, the loss of her patents. She notes, “I have three patents and fight every day to protect my IP [intellectual property] from infringers.”

For her, there is one specific and appalling incident that really stands out.

“I was bullied by a big tough CEO of one of the largest film companies in the world. Turns out his wife’s company infringes fully on my UTILITY Patent. I set a meeting with her for a hashtag me too #metoo moment. The husband barges in, slams his fist 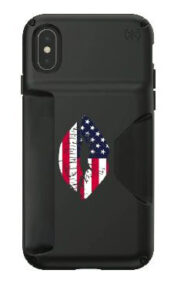 on the desk and rips up a copy of my patent in front of me, for effect, I guess. Yells at me, ‘I would rather spend all the money I have on IPR’ing you than ever paying you a dime.’ The wife meekly sits and tells me she thought she had done research on her design patent so it was all ok. Her design patent was a joke versus my UTILITY patent.

“The husband used his clout at his movie firm’s $2,000 an hour law firm to threaten me. I had to walk away or be IPR’d by the bully of a man who clearly didn’t let his wife do any of the negotiating or in this case pummeling of me, a female, indie inventor. I will tell you how much that one alone cost me when I was forced to walk away from that losing battle: 1 million dollars! I would be IPR’d and the threat of losing all my patents because the system is corrupt was too great, so I walked away.”

What is occurring with Kip, and has happened to thousands of other inventors, is so far from what our Founders had envisioned and established. They knew that innovation would be a key component to the economic success of their new country. In our U.S. Constitution Article I, § 8, Clause 8, it states, To promote the Progress of Science and useful Arts, by securing for limited Times to Authors and Inventors the exclusive Right to their respective Writings and Discoveries. 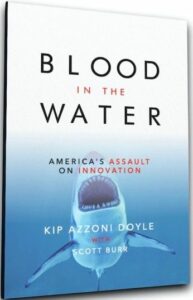 exclusive right and liberty of making, constructing, using and vending to others to be used, the said invention or discovery.

Kip rightfully says, “If we had a strong patent system where the words IPR and PTAB didn’t immediately mean death to all our dreams, then we could prosper and grow the economy through jobs and positive productivity. This is completely backwards and I am sure the Founding Fathers are rolling in their graves at the state of their once beloved and world-renown regaled patent system.”

And, as the PTAB kills patents, so, too, do they put the American Dream further at risk.

Her experience as an “indie” inventor and her run-ins with the post-AIA patent system compelled Kip to write Blood in the Water: America’s Assault on Innovation, forthcoming this fall, which explores her own experience, that of other “indies,” and the recent history that has blown the U.S. patent system so wildly off the rails, and which she hopes will both inform and rally readers to demand the legislative changes that the patent system so desperately needs.