Stu Douglass is an inventor and the founder of Roller Clutch Tools LLC. He invented a revolutionary new tool that markedly improved and replaced the traditional ratchet wrench. The roller clutch doesn’t use gears, it uses rollers, which are stronger, more efficient and safer. If you’ve ever used a ratchet in a tight space, you know the frustration of not having enough room for the gears to engage. The roller clutch solves this problem. Stu licensed the roller clutch to Snap On Tools, and sales were rising. Lowe’s became interested and approached Stu about an agreement and at the 11th hour had changed the terms of the agreement. Eventually, two IPRs were ultimately filed in an effort to invalidate (revoke) his patents, forcing Stu and Roller Clutch to accept even less of a financial settlement.

Excerpt From Ep.3 ‘In The Trenches With Inventors‘ – featuring Stu Douglass. 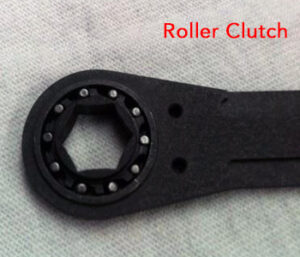 Stu Douglass invented a revolutionary new tool that replaces the traditional ratchet wrench. The Roller Clutch doesn’t use gears. Instead, it utilizes rollers, which are stronger, more efficient and safer for use. One of the additional benefits with the Roller Clutch is that, unlike a rachet in a tight space, the rollers work, allowing one to complete a job in a tight, confined space.

He licensed his roller clutch invention to Snap On Tools and all was right with the world. Then, things took a turn for the worse. Big Box Lowe’s was interested in the Roller Clutch and approached Stu about licensing.

Months were spent negotiating to obtain a licensing agreement with Lowe’s. Terms were finally agreed upon and then, in the 11th hour, Stu noticed that they had changed the royalty amount, basically cutting it in half. Needless to say, with that kind of move on their part, he did not sign the agreement.

Despite the fact that there was no in-place legal agreement, Lowe’s went into production and sold more than twenty-five million dollars of the tool.

When Stu found Lowe’s infringing – stealing his idea – and that they were actively selling the product, he filed a complaint against Lowe’s and their vendor, JS Products, a Chinese firm that produces tools for Lowe’s.

That seemed to work. They negotiated a settlement.

Unfortunately, as a result of the America Invents Act of 2011 (AIA), companies such as Lowe’s that infringe on patents can avoid a traditional trial by filing an Inter Partes Review (IPR), an attempt to invalidate a patent, with the Patent Trail and Appeal Board (PTAB). That action stays the more historic and conventional legal action until the PTAB IPR is finished.

Instead of paying the agreed upon settlement amount, Lowe’s decided to go to the PTAB. The Big Box chain filed two IPRs, challenging Stu’s patents and their claims.

Having learned that the PTAB has a record of invalidating 84% of the 3,000 patents they have reviewed since they began, Stu and Roller Clutch settled for half the original settlement, instead of going thru the PTAB and risking invalidation.

Throughout the process Stu discovered that patent infringement is not a crime, it is only a civil matter.

“None of these companies, the big ones, they don’t care about being sued for infringement,” Stu explains. “That’s part of their business plan.”

After his more than frustrating experience with Lowe’s, Stu’s advice to other inventors who find companies stealing their invention is this: “Infringement happens. Nothing you can do to stop it. In the event you are infringed, what type of complaint are you going to file? What I learned, we should have went in, instead of infringement, we should have went in for trade secret theft. And, again, that is criminal. Makes it much easier. Because now a Federal Court has to handle it. To me it is much more deadly because it’s easier to prove, especially if you have a signed non-disclosure.”

Despite whatever good intentions may have existed when the AIA was passed, the lives and livelihoods of too many independent inventors and small business innovators have been devastated since the PTAB started.

What our Founders wrote in our U.S. Constitution is no longer the case: “To promote the Progress of Science and useful Arts, by securing for limited Times to Authors and Inventors the exclusive Right to their respective Writings and Discoveries.” (Article I, § 8, Clause 8)

If our country is to remain at the top of the invention tier, and if we are to be able to offer the American Dream to anyone with a better idea, we must go back to our roots. We must allow actual inventors to maintain their patent rights and not allow multinational conglomerates and Big Tech to outright steal disruptive innovation and, in the process, destroy lives.