Josh Malone is the inventor of Bunch O Balloons, volunteer with US Inventor, and a USPTO registered patent agent

I am a firm believer in the provision of the U.S. Constitution that our patent system is to “promote progress in the useful arts” by “securing to inventors the exclusive right to their discoveries”. Unpredictability in Patent Trial and Appeal Board (PTAB) proceedings is paralyzing inventors who cannot obtain investment to develop and manufacture inventions or obtain licenses to commercialize them. At the PTAB, burdens of proof are reduced while subjective determinations are calibrated to err on the side of invalidation. Specifically the “reasonable likelihood” standard for institution is vague and readily achieved by an expert declaration that combining several pieces of prior art “would have been obvious” under the Supreme Court’s KSR precedent. Once a trial is instituted, challengers need prove invalidity by only a preponderance of evidence. PTAB judges have interpreted these provisions of the AIA as removing the presumption of validity and have oriented their decision-making toward invalidation whereby patent owners lack any viable defense against an obviousness argument, rendering invalid 84% patents subject to a final written decision.

Thus the implementation of the AIA has made it easy to invalidate “bad patents” but has not provided a means for securing “good patents”. In particular, no provision has been made for the disproportionate harm caused to inventors who rely on patents to develop and commercialize our inventions.

Large corporations and patent assertion entities can absorb the expense and risk of PTAB trials as a cost of doing business. They have access to billions of dollars in capital and portfolios of hundreds or thousands of patents. They need only factor in the cost and risk of PTAB invalidation in their budget and business plans.

Small practicing entities on the other hand, rely on a single patent or a small portfolio to survive – it is often the only means to protect a fledgling startup from a huge predator that copies our invention. Where an examiner, supervisor, district judge, and/or jury will uphold the validity of our core patent(s), the PTAB usually will not. These are not glaring mistakes, but close calls that could go either way under the AIA statutory provisions.

Who Benefits from the PTAB? 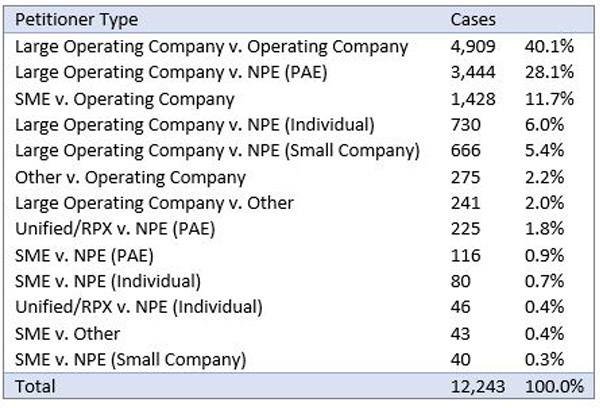 A common misconception is that the PTAB is necessary for small businesses to fend off “patent trolls”. To the contrary, of the more than 12,000 petitions that have been filed, less than 2% comprise small and medium size entities against NPEs. The vast majority of petitions are filed by large operating companies, usually against a smaller competitor.

Of particular concern are the 40.1% of petitions by large operating companies against other operating companies. While Unified Patents – the curator of this dataset – does not fully partition the roles and company sizes, my observation is that the petitioner is usually multi-billion or trillion dollar corporation challenging a much smaller competitor. Top petitioners include Apple (673 petitions), Samsung (549 petitions), Google (354 petitions), and Microsoft (227 petitions). These trillion dollar corporations can easily afford to litigate their invalidity challenges in district court where a small business might obtain contingency representation and an opportunity to plead their case to a jury.

It is rare that a small business avails itself of the PTAB to fend off a meritless patent assertion. Conversely, it is common that a large corporation weaponizes the PTAB to crush a smaller competitor with superior technology. Where is the benefit in summoning a small entity with limited resources to defend their patent at the PTAB against a challenger with vastly greater resources? Clearly the benefit is that it is easier to invalidate a patent at the PTAB. Yet there are circumstances where a presumption of validity, the clear and convincing burden of proof, robust discovery, liberal procedural rights, an independent judge, and/or a trial by jury are warranted.

It is widely accepted that AIA trials have had a dramatic impact on the economy and the integrity of the patent system. There is a vigorous debate over whether the impact has been positive or negative. I contend that a more granular analysis is advisable, in particular the impact on small practicing entities. Whatever the net impact of PTAB has been, it has caused serious harm to this group of stakeholders.

In general NPEs have resources and can adapt their business models to manage the cost and risk associated with PTAB trials. Small practicing entities however, fully allocate our resources to R&D, manufacturing, and other investments in developing and commercializing the claimed invention. To small practicing entities institution of a trial has a substantial negative impact on our business, introducing dramatic unexpected costs and risk.

Such small businesses are the backbone of innovation and job creation and normally do not have hundreds of thousands of dollars to risk on outcomes in post-issuance proceedings. A 2008 survey of technology startups found that “cost considerations in patenting loom large for startups, with the cost of prosecuting and the cost of enforcing the patent cited by more respondents than any other reason [for not patenting]”. Another scholar explained, “even if an early-stage company had a patent, it is unlikely that it would have resources available to enforce the patent through litigation against a competitor. That is particularly true when the competitor is a large firm. One problem is the disparity in litigation resources. One investor emphasized the concern that a large defendant would ‘rain lawyers on your head and tie you up in court for the next ten years.’”, which is what happens to many patent owners at the PTAB. Small businesses must be able to rely on their issued patents, and disputes with competitors must not be encumbered with delays, expense, and uncertainty of post-issuance review within the USPTO.

Some Examples of PTAB Harm

• Patrick Buckley is the inventor of several patented smartphone accessories including a virtual reality viewer that was manufactured by his company DodoCase in their San Francisco factory. They were put out of the VR viewer business by infringing Chinese importers, one who filed IPRs on each of the 3 patents for the invention. Lacking funds to defend the IPR, DodoCase was forced to assign the patents to their attorney in exchange for representation at the PTAB and in federal court. The delays and cost added by the PTAB proceedings eventually forced the attorney-assignee to settle the infringement case. But for the PTAB, Patrick would have profited from his invention, invented and launched more products, and created more American jobs.

• Mark Kilbourne is the inventor of the patented Remotizer – a mechanism to retrofit deadbolts for remote actuation. He manufactures his invention and sells it on his website remotizer.com. Kilbourne sent a sample to Apple at their request for testing so his App to operate the deadbolt could be offered on the Apple App Store. Then Apple went to market with their own device and filed an IPR to invalidate the patent. Kilbourne did not have anywhere near the $450,000 (average) required to defend his patent at the PTAB. With his limited budget, he retained an attorney who has never won a case at the PTAB for a patent owner and he did not retain an expert witness. Apple prevailed because they had better representation and AIA trials inherently have high invalidation rates. Apple is a 2 trillion dollar company that could easily afford to plead their case in a regular court where the inventor would have had a better chance of prevailing.

• David Chadwick is the inventor of a patented automated creel for supplying yarn to a carpet loom, making it safer and more efficient. His company Automated Creel designed and built the prototype which he then shared with a customer in the carpet manufacturing business. The customer implemented the design and filed two IPR petitions challenging the patent to avoid paying for a license to practice the patent. The PTAB dispute ran almost 4 years during which the infringement case was stayed, concluding with 13 claims invalidated and 8 claims upheld. Automated Creel laid off employees and closed down business due to the uncertainty, delays, and expense introduced by the PTAB.

Hundreds of other small practicing entities have been jeopardized or ruined by PTAB reviews, many founded and/or managed by the named inventor on the patents.

Small practicing entities are a crucial source of innovation and competition, but implementation of the AIA has sidelined us largely due to cost and risk associated with AIA trials. Corrections are needed so that the patent system works to “promote progress in the useful arts” by “securing to inventors the exclusive right to their discoveries”.

This Article originally appeared on Law360,