Ray Perkins is an inventor and founder of Eco World Group LLC, and co-founder of Eco Agro Resources. Ray is originally from Florida but resides in North Carolina. He and his Eco Agro team developed a slow-release compound for urea-based fertilizers that reduces water pollution by 30%, helping prevent red tide and algae blooms.

Patents owned by Eco Agro were attacked first by Koch Industries in regular court, then by Solvay at the Patent Trial and Appeal Board and his inventions were then invalidated.

He owns a sister company, World Source Enterprises, that utilizes the patents and innovations developed by Ray to specialize in curing Red Tides, Algae bloom outbreaks and hypoxia currently in the Chesapeake Bay and Gulf of Mexico. 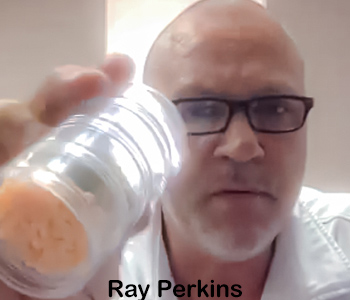 “The PTAB rules give these patent bandits a path to steal technology,” scientist and inventor Ray Perkins wrote in his letter to President Trump. “And ultimately the rules themselves kill the incentive for small inventors to innovate. In the case of World Source Enterprises, those innovations can cure Red Tides, Algae bloom outbreaks and hypoxia in the Chesapeake Bay and Gulf of Mexico. It is bad for American Business and worse for the American Dream.”

If you are an innovator or an inventor, you have probably heard about the Leahy-Smith America Invents Act of 2011, aka the AIA. What has been allowed to occur since the passage of this legislation, and the establishment of the Patent Trial and Appeal Board (PTAB), is large conglomerates, including Big Tech, being allowed to ‘legally’ strip inventors and small innovative businesses of their patented products, rendering them invalidated, or revoked.

This, despite the fact that our U.S. Constitution protects that form of property. Article 1 Section 8 states: “To promote the Progress of Science and useful Arts, by securing for limited Times to Authors and Inventors the exclusive Right to their respective Writings and Discoveries.”

That was pretty much, not always, the way things were for over two centuries until the PTAB hit. Then it became open season on inventors and their patents.

How? Along with the PTAB came the “inter partes review” or IPR. According to the AIA, an IPR can be instigated “only on a ground that could be raised under section 102 or 103 [of the Patent Act] and only on the basis of prior art consisting of patents or printed publications.” 35 U.S.C. § 311(b).

The IPRs have ended up being a key area of vulnerability for the “little guy” in their fight against much larger firms with seemingly unlimited financial resources. IPRs have been filed, and cases won, based upon ‘prior art’ which in no way resembles, nor could be assembled, to perform or act the same as the patents being attacked.

This is precisely where the story unravels for Ray and his unique patents.

The story of Ray and World Source Enterprises (WSE) is one riddled with questions and no underlying tangible answers. Ray discovered a previously unknown slow-release compound for urea-based fertilizers that reduces pollution by 30 percent, and effectively cures Red Tides and algae blooms.

Their provisional patent for their breakthrough process was filed on October 1, 2012 and their non-provisional went into effect on May 8, 2013. Almost immediately out of the gate Ray’s patented process was a major success and within months had generated 14 million in sales. It was a huge success and had no rivals in its effective performance.

“This was a big deal for a bunch of rural guys from North Carolina,” Ray said. “We just invented something more or less by accident.”

However, in 2014, the Koch brothers took notice and filed a lawsuit against Ray and his company. The Koch brothers began spreading the news among Ray’s customers and other companies about the patent infringement case against World Source Enterprises. That information caused people and firms to turn away from Ray’s company and no longer do business.

“We had over 21 employees at the time,” Ray said. “But with the lawsuit, our company dwindled down to about four employees.”

While in the process of the first lawsuit, a French multinational company, Solavy, approached Ray regarding the purchase their patented technologies. Even that fell apart. Things continued to worsen.

In order to operate at all, in 2018, WSE entered the market and started reselling their patented process. However, before they could blink an eye, a declaratory judgment was filed against them.

“They filed with PTAB two IPR actions against us and after a long fight, our patents and claims were invalidated,” Ray explained. “The patent had to do with a prominent manufacturing process, and they combined that with an old obscure Chinese patent, which had nothing to do with putting this sparse coating on.”

Yet, the Administrative Patent Judges (APJs), who are not actual judges and are not trained, expert patent examiners, concluded the old Chinese way opened the door to ‘prior art.’ Even more detrimental is the fact that Ray’s opportunity to address and argue the IPR at the PTAB was ignored, never granted.

The accused not being allowed to speak, to face their accuser? In what other American legal setting is this allowed?

Over the past couple of years, during the time Ray and his firm have been dragged down by the ludicrous IPRs, several other companies, seven at last count, have been generating large profits by infringing on Ray’s once validated, now invalidated, patent technologies.

Ray expressed more of his concern in his letter to the president. “To pass the AIA the lack of clear PTAB rules has been used to weaponize the PTAB process for ‘Patent Bandits.’ The AIA incentivized and created Patent Bandits and specifically the PTAB process. The lack of clear rules for implementation of trial is the primary caution when you drill down on the finite details. And Americans will see the truth in those finite details eventually.”

In a world of honest and ethical business dealings, firms would have lined up at Ray’s door to license his technologies, allowing him the freedom to continue his research and innovation and, perhaps, develop more breakthroughs.

However, too much has gone wrong since the passage of the AIA and establishment of the PTAB. There is outright theft allowed by deceitful or corrupt companies, seemingly sanctioned by these IPR proceedings. The legal cost to fight for one’s property rights (as guaranteed in our U.S. Constitution) has become much too burdensome. The emotional damage to family members attempting to hold onto one’s Patents has taken more than its toll.

“In the Intellectual Property World innovation stops and our world fails to progress through innovation when people just don’t care or trust the system anymore,” Ray wrote. “Many of us are beaten … we just don’t care anymore. Hence, my personal role as a retired ‘occasional’ consultant now, instead of pursuing my passion and my experiences in chemistry as an innovator and entrepreneur into my later years. I see the reality of our IP world, I can speak truth as I no longer ‘have a dog in the hunt’.”