Interview: Kip Azzoni Doyle on her book Blood in the Water

Blood in the Water
An inside look at the sorry state of the U.S. patent system.

Kip Azzoni Doyle is a true renaissance woman. Aside from being a mother, she is a writer, an “indie” inventor, adventurer, entrepreneur, gearHead, screenwriter (with a range of feature films and TV properties in play), freelance journalist, content creator, humanitarian and is mission-driven for veteran causes.

As an inventor, she created what became known as the The CardShark WalletSkin and, in 2014, applied for and received three utility patents from the US Patent and Trademark Office (USPTO). Then the all-to-often inventor’s nightmare began…infringers stole her idea…she was sued…she was threatened. She fights every day to keep her constitutionally guaranteed rights to her property.

However, this is not specifically about her CardShark creation…here we turn the spotlight on her Fall 2021 publication. 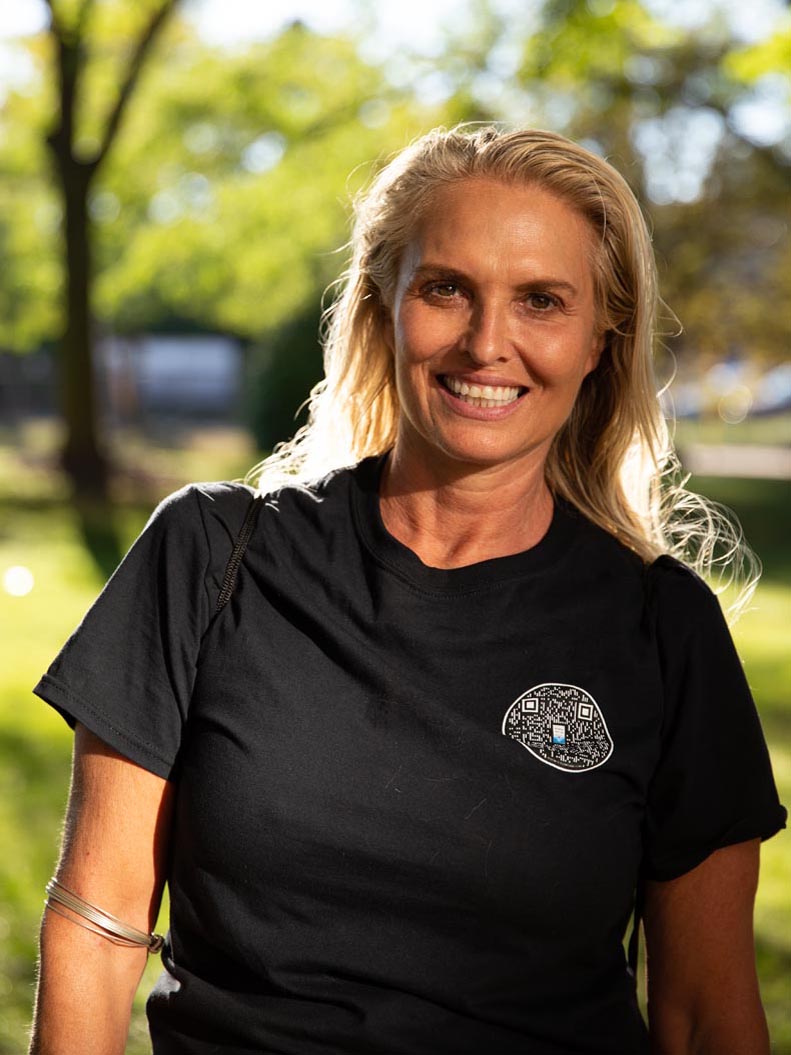 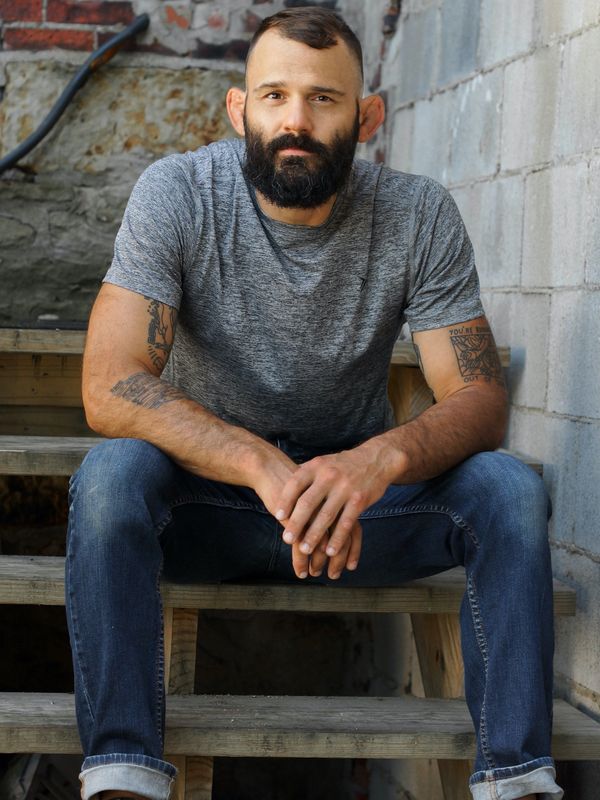 Continuing to add to her life’s curriculum vitae, Kip is also an author (or, a note-taker and story extractor, as she calls it), with her book, Blood In The Water: America’s Assault On Innovation, co-authored with Scott Burr. This non-fiction work is based on her own experiences as an inventor, and that of several others.

Blood In The Water takes an inside, in-depth look at the sorry state of the U.S. patent system, the crooked dealings that got us here, and what it’s going to take to get us back on track.

US Inventor was able catch up with this extremely busy lady to ask her about Blood in the Water.

What was it that first planted the seed to write Blood in the Water?
It was the feeling that here we inventors were with our devastating stories and I couldn’t seem to find any resources that were actually speaking in a language I/we could understand. I am not a lawyer and I can’t follow all the lingo and jargon, I also couldn’t get past the first sentence of most of the legal briefs cuz they induced instant narcoleptic responses.

I figured as a writer who had come up under the likes of George Plimpton, I might as well try to do what he taught me. Engage through storytelling and don’t always focus on the obvious or orthodox, be a ‘parachute journalist’ and jump into this and tell me the stories from an engaging perspective, be one of these people (in this case the inventors) and bring their stories to life. 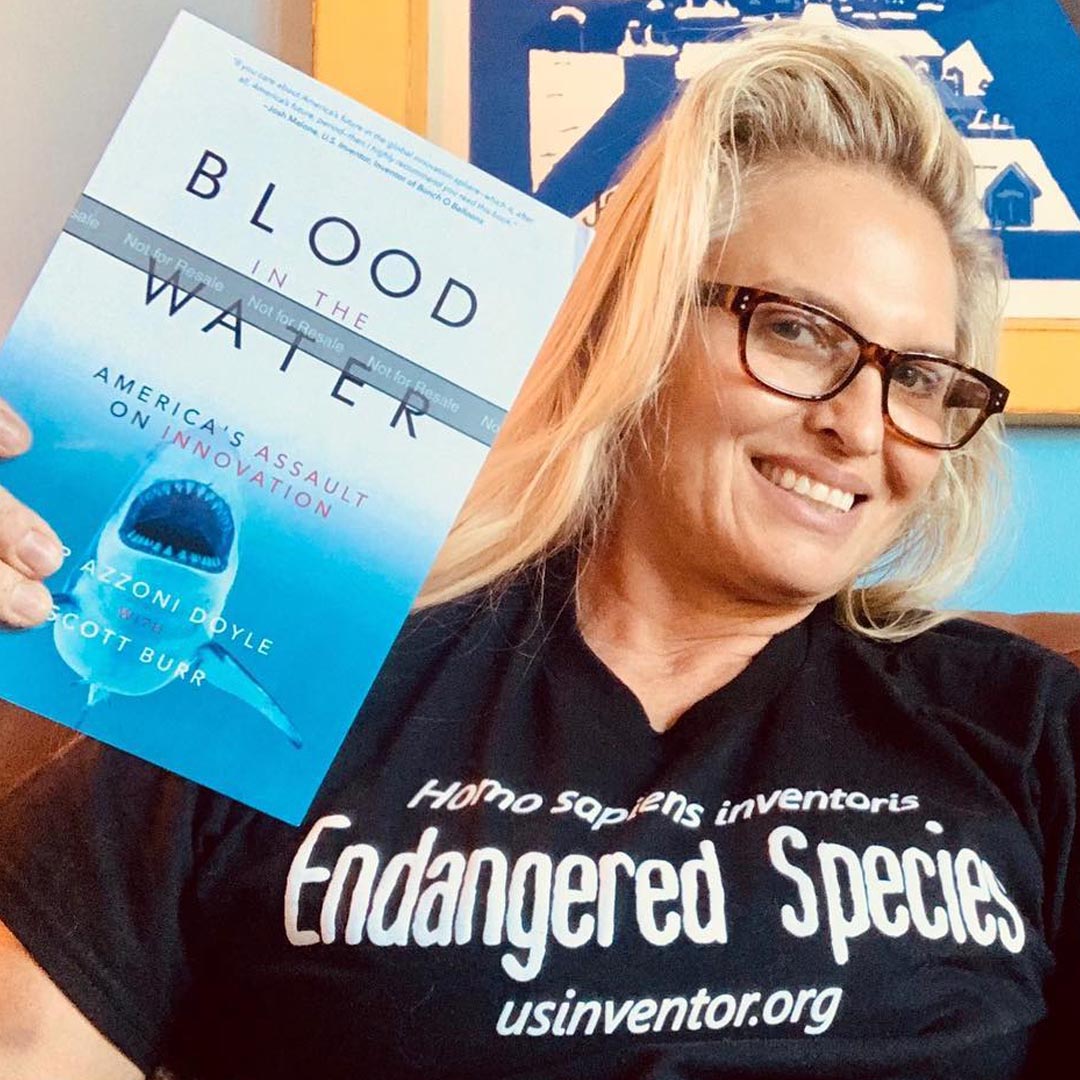 When was it that you knew for certain that you would write the book and approximately how long did it take?
I knew the minute the AIA (America Invents Act) rolled in and over us inventors. I had basically dropped down into this mess when I received my patents. Timing could not have been worse for me as an inventor, which I suppose is why it couldn’t be better for me as a writer. There was a dramatic shift occurring here in the once strong US patent system and I had to set about ‘mansplaining’ this to regular folks. I have been collecting these stories and articles for over the ten years since the AIA rolled justice.

Please tell us a bit about Blood in the Water: America’s Assault On Innovation. From the title it obviously concerns inventing. How about a few teasers.
I had some folks tell me to change the title to something like the extreme sport of patenting. Good, sure, but to know me is to know I can’t tiptoe around something when it really matters to me. Up and in your face and drawing from what I know that’s how I write. I grew up on fishing boats, I still go ‘sternman’ on my best pal’s lobster boat in Maine. There really is nothing delicate about it. I liked the analogy of the limping and maimed little fish swimming in shark-infested waters as a perfect analogy to how us inventors are getting mauled and chewed alive by much more powerful predators, the sharks of Big Tech and the oceans they control, i.e., The United States Patent System.

This book oughta bring the stories of independent inventors (indie inventors) into everyone’s orbit so they understand how the world as we know it with all its gizmos and gadgets, tools and technologies were all THANKS TO THE TINKERERS. Here’s a great history lesson/comment on inventors:
“Tinkerers built America. Benjamin Franklin, Thomas Edison, Henry Ford, all were tinkerers in their childhood. Everything from the airplane to the computer started in somebody’s garage. Go back even further: the Industrial Revolution was a revolution of tinkerers. The great scientific thinkers of eighteenth-century England couldn’t have been less interested in cotton spinning and weaving. Why would you be? It was left to a bloke on the shop floor who happened to glance at a one-thread wheel that had toppled over and noticed that both the wheel and the spindle were still turning. So James Hargreaves invented the spinning jenny, and there followed other artful gins and mules and frames and looms, and Britain and the world were transformed. By tinkerers rather than thinkerers. ‘Technological change came from tinkerers,’ wrote Professor J.R. McNeill of Georgetown, ‘people with little or no scientific education but with plenty of hands-on experience.’ John Ratzenberger likes to paraphrase a Stanford University study: ‘Engineers who are great in physics and calculus but can’t think in new ways about old objects are doomed to think in old ways about new objects.’ That’s the lesson of the spinning jenny: an old object fell over and someone looked at it in a new way.”
― Mark Steyn

What do you love most about the writing process? And tell us about Scott Burr.
I love going after the stories of others. Letting them tell their stories in their own words. I loved swapping out my inventor role for my author’s pen & paper. Based on my experience inventing & patenting The CardShark WalletSkin, I sharpened my pen and stabbed at this story of the injustices that me and my fellow indie inventors were facing. But I couldn’t have ever done this book without Scott Burr. Scott first came on as an editor, but Scott stepped in to stop the hemorrhaging on account of my sharp stabs at this story. He edited himself right into co-authordom. Put it this way, only a Jiu Jitsu instructor and author himself could possibly defend himself against my sometimes combative prose.

Whom do you think would benefit from reading your book and why?
I’d like to think that everyone could learn a thing or two about how skewed the patent system has become. Once you know, you know. You can’t then go back to pretending it doesn’t matter and what is happening to the indie inventors is good, or sustainable. The next generation of inventors will go elsewhere to get their patents, “the brain drain” (which is what happens in third world countries – heavens no, not the almighty US of A) where the best and the brightest leave the US because we basically have a patent free system now – whatever a patent used to protect doesn’t anymore. Not here anyway.

I’d like to hope this book gives everyone a chance to actually understand the corrupting of the patent system in words and stories that they care to read and can understand. No legalese to drug you into LaLa land.

What is the one major objective you would like to accomplish with “Blood in the Water”?
Give normal people a brief look at how far we have fallen from the once strong patent system in this country. I line the history part up like shots on the bar, down and dirty, trying to make it as painless as possible. I think we get through it without too much discomfort or boredom or slurring of words. Then the stories of real inventors being wronged always catch my attention far more than statistics, numbers, or math. You see, math has no emotion and I think we need people to understand from first hand accounts so they can get fired up about this criminal activity.

I’m happy and flattered as heck to sign copies! If anyone wants that, I can sign and send to them. I think letting me know through the Blood in the Water  website Contact page works best. While there, please send me your story if you’re an inventor who has been wronged. I intend to crank up the podcast to capture these stories and keep this narrative going and bring the fight to the policymakers who Big Tech has greased.

Okay, time for a little trivia…

What would you say is your most interesting writing quirk?
Don’t I love the footnotes! I wanted to flip the concept of a business book on its head. Death by ibid I used to say. Footnotes made me glass over so I decided to take all the juicy nuggets and morsels and throw them down below in the footnotes. Keep it interesting and defy the droning on of ibids.

Is there a specific quote that motivates or inspires you?
Albert Einstein: “Nothing happens until something moves.” So let’s move it. Lets join the fight to help protect innovation, sign the Inventor Rights Resolution and take back our patent system. What Would the Founding Fathers Think! #wwtfft

Now to put you on the spot. Tell us something about yourself not many people know.
I love racing cars, motorcycles, anything with speed and when I’m not jonesing for that, I love to work the stern of a lobster boat. Now, on a serious note, I am dedicated to helping our veterans. The other side of my brain is spent working now on a documentary and a tv series around the veteran reintegration.

My other companies and endeavors (Cardsharkskin, Rags of Honor, Veteran Roasters and RNR Brews) are all about mission-driven products: hiring homeless and at-risk veterans and helping them reintegrate through the dignity of a JOB! I wrote a PSA and short film with Martin Sheen around the veteran suicide epidemic “The worst part of war should not be coming home.”

Thanks to US Inventor, I have learned so much from wonderful fellow inventors. I thank them all for sharing their stories and I’m honored to do my best to bring their stories of loss and perseverance to the forefront. Onward!

Blood in the Water is an engaging expose on our U.S. Patent System